Don’t you love it when you’re watching a movie…and you think you have it all figured out until some crazy twist at the end, that you did not see coming, just knocks you right out of your seat?  Yeah, me too…

I’m still trying to play catch up on the sauces that I made for the gnocchi from last weekend, and this one I have to say is a definite “make again”. I think I may have gone a little starch crazy, but honestly? It worked.

I did add some butter and chicken stock, and cooked it on low flame until it thickened. I didn’t add the chestnuts until the last minute; I didn’t want them to lose their texture. I wanted to be able to taste them in the sauce. I quickly cooked up some gnocchi, so that I could do a quick taste test.

Of course, I decided it needed cheese, so I sprinkled ricotta salata (a heavy sprinkle, because I love it) over the Brussels sprouts and gnocchi. I took a taste, and I liked it, but I didn’t get that first “mmmm” factor. The creamy, soft nutty flavor of the cheese really worked well with the Brussels sprouts, potatoes, bacon, and chestnuts, but I wasn’t in love. It’s funny, because I thought I was so creative when I added the chestnuts to the mix.  I truly thought that they were going to be the star of the show…but in all honesty…they really weren’t. They were good. They belonged. But they weren’t the star. 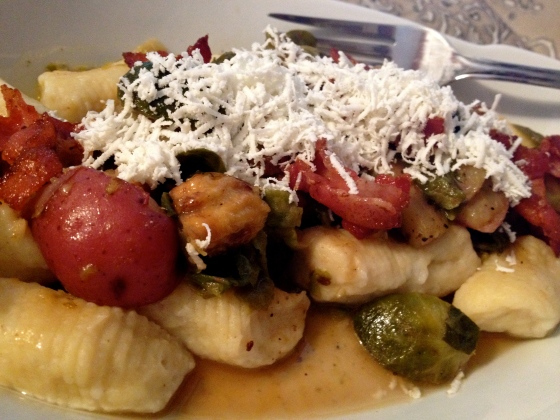 After another bite or two, it hit me…fresh lemon….and I thought, “Why not?”… I’m so glad I’m open to my own ideas, and not one to reject them immediately…and I’m so glad that I always keep a lemon or two in the fridge… because I have to tell you…

A squeeze of fresh lemon over the entire dish made it shine.
Like the heavens opened up with beams of light and a choir of angels singing…
Ok, maybe I exaggerate. A lot.
But the lemon… I totally did not see that coming. It knocked me right out of my seat.

Don’t forget, I love a million levels of flavor going on in my mouth…and this…what seemed to be a boring little dish…suddenly became exciting!

I can’t even begin to tell you what the lemon did for the potatoes.  They were a little lost in the crowd until the lemon showed up…and then wow, did they show up. Those little starchy chunks of goodness just popped!

The Brussels sprouts with the lemon brought an unbelievable fresh, citrusy, excellence to the dish…the chestnuts with the lemon…so…SO crazy good…and of course the gnocchi with the lemon.. I mean, who doesn’t like lemon with their gnocchi? Not this girl.

Just like the movies… a surprise ending.  You gotta love it..

Prepare the chestnuts per the instructions below.  Eat a couple to make sure they’re properly cooked.  Eat one more…yum….Then roughly chop the rest.  Set aside.

In a large frying pan, cook the bacon until it’s crisp over medium heat.  Drain on a paper towel lined plate, and set aside.  Remove all but two tablespoons of the bacon grease from the pan, and add the onions. Sauté them until they’re golden. Add the garlic and sauté for a couple minutes more. Add the potatoes and Brussels sprouts, and cook them until they’re browned and tender, stirring occasionally.

I think the hardest part of roasting a chestnut is slicing into it.  You should really use a sharp knife to slice one side of the chestnut, just deep enough to cut the shell. Make sure you’re cutting it on a board, and not holding the chestnut in your hand!!

Place the chestnuts on a cookie sheet, and place in the oven.  Bake for about 45 minutes.  Right before you remove them from the oven, dampen a towel under hot water.  Remove the chestnuts from the oven, and immediately wrap in the damp towel for about 15 minutes.  Most of your chestnuts will peel easily.  Don’t get too discouraged if they all don’t peel easily…some of them will take a little bit more work than others, but they’re totally worth it! You will definitely want to eat a few before they go into the sauce…

Looking for something on my blog? Search here!