You know, I think that I’ve made it quite clear that I’m a sucker for a loaf of bread fresh out of the oven…and it doesn’t matter if it’s my oven, or someone else’s oven. There is a little bakery (Okay, I say little, but it’s quite the production) called DiCamillo’s in Niagara Falls that bakes a pretty mean loaf of Italian bread. When I’m there, the first thing I look for is a piece of cake (their frosting is to die for), and a couple slices of pizza for Mike. And their molasses cookies. I can’t get past them. They’re soft and chewy with a sprinkling of big granules of sugar…and so, SO delish.

But…it’s the bread…the thing that brings me there each and every time..and I can’t help but buy the large loaf, knowing full well that it will go stale before we can eat the whole thing. It’s seriously that big, but it’s so darn delicious.

I’m totally okay with the bread going stale, because it never goes to waste. It will either end up in meatballs, I’ll make breadcrumbs with it, french toast, or this beautiful panzanella salad.

A traditional panzanella or panmolle is made up of day old bread, tomatoes, basil…sometimes cucumbers and onions…drizzled with olive oil and vinegar. The bread soaks up the deliciousness of the tomatoes, olive oil, and vinegar.

Of course…I think you know me by now….I usually don’t go for making the traditional…I’m going to make it my way…with, most likely a few extra calories…. the way that I like it…and the way that I think you would like it if you were coming over for dinner.

Which, I hope, is very soon.
It’s always an open invite. 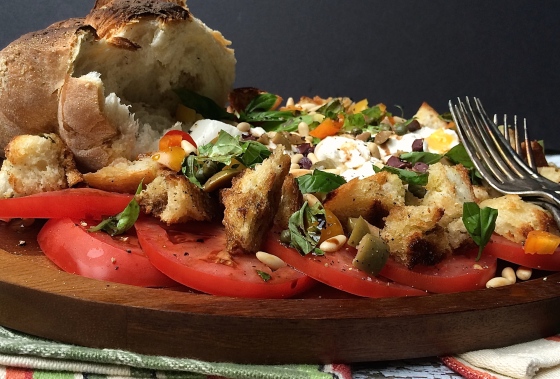 I start out traditional with the tomatoes…slicing them thin and placing them around the platter. Make sure you eat a couple slices or more while you’re doing this… because it won’t be long before we’re eating store bought instead of farm fresh…a huge difference…

Next comes the bread… Normally you’d break it into pieces and toss it into the bowl, and I do, but then I toss it into a frying pan with melted butter and garlic, and fry it until it’s browned and crisp on the outside, but with that soft chewy center. The garlic is a necessity for me in this salad, it just gives it such a great background flavor.

And then I tend to go for creamy and briny. Burrata cheese is perfect for this, because it breaks open, and that lovely combination of cream and mozzarella spills over the tomatoes and bread. I love to chop Kalamata and Sicilian olives on top of the mozzarella, as well as a heavy sprinkling of capers. A handful of toasted pine nuts finishes it off wonderfully.

I know I’ve said it before, but I love a million flavors going on at once…and the creaminess from the cheese, saltiness from the olives and capers, sweetness from the tomatoes, the nuttiness from the pine nuts, the smokiness from the sautéed garlic, the fresh taste of basil, and the acidity from the vinegar…for my tastebuds…work together to make the most perfect panzanella salad.

I’m not sure…can I say that I’ve achieved umami?
Possibly..
But I’ll just call it a perfect blend of delicious flavors..

A panzanella that totally tickles the tastebuds, yet is so pretty…that I would happily set on the table just for you…my most honored guest.

Life is good…it’s a “I don’t know who thought of throwing stale bread and tomatoes together, but I’m really glad they did…” kind of good.. 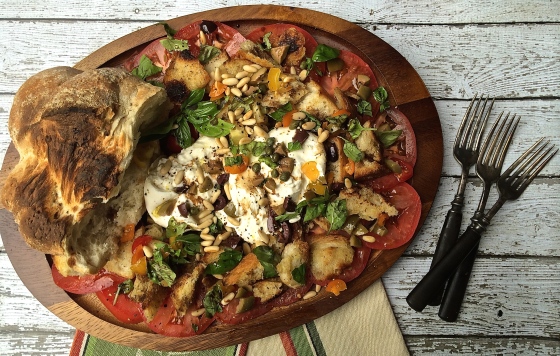 Just a quick note about this salad…. I really don’t have measurements for the ingredients, and all I can say is to be heavy handed with everything. By heavy handed, I mean generous…and make it the way you think it would taste good… If you think you would want more basil, then by all means, tear up some more over this salad. If you want to throw some fresh parsley over it, then I say “oh yeah, do it!!” Go crazy, and have fun with it! There is no right or wrong.

2 large heirloom tomatoes, (your favorite color) sliced thin
1 or 2 smaller heirloom tomatoes in different colors, chopped
Stale bread, broken into pieces (about three cups)
1/2 stick butter
2 cloves garlic, minced
A good handful of basil, torn into pieces
Capers, about a tablespoonful or more
A mixture of Kalamata and Sicilian olives, chopped (about 1/3 cup)
Pinenuts, toasted (about two tablespoons)
Olive Oil, your favorite brand (start with a tablespoon)
Balsamic Vinegar (you get what you pay for when it comes to balsamic) (start with a tablespoon)
A peppermill

Place the tomato slices around the outer edge of a platter, overlapping them.

Break the burrata open, and place in the middle of the platter.

Serve immediately while the bread is still warm. 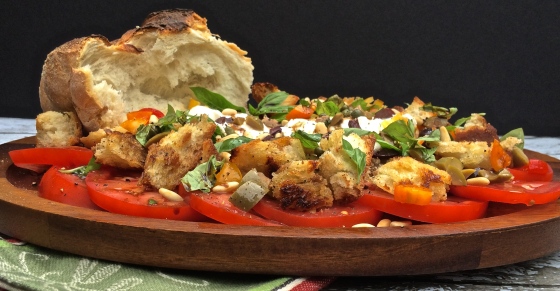 Looking for something on my blog? Search here!